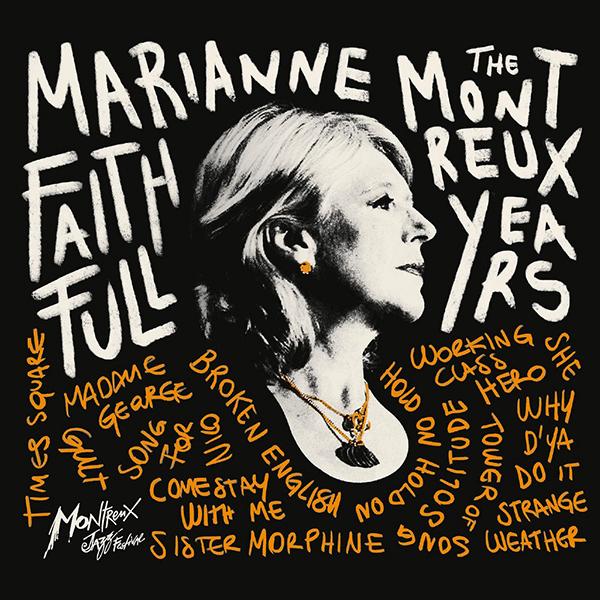 Marianne Faithfull’s name is synonymous with the authenticity, artistry and individuality of the festival and this collection is a celebration of her unique talent. The Montreux Years collection will bring together, for the first time, some of the finest moments from Marianne’s most celebrated performances.

Instantly recognizable with her raw, varied vocal talents and tangible charisma, Marianne Faithfull has been a long-time friend of the Montreux Jazz Festival, appearing five times over a nearly 15-year period: 1995, 1999, 2002, 2005 and 2009. Marianne Faithfull: The Montreux Years opens with an enchanting rendition of Van Morrison’s “Madame George,” recorded live at Auditorium Stravinski on July 10, 1995, where Faithfull’s powerful range and unfaltering dynamism was instantly apparent.

The singer’s fans can immerse themselves in these unique recordings, which include several songs from her celebrated album Broken English, such as an electrifying, guitar-heavy performance of the titular track “Broken English,” the soaring “Guilt,” and John Lennon’s rousing anthem “Working Class Hero.” Meanwhile, the haunting sensitivity of “Strange Weather,” recorded live at Casino Barrière on July 6, 2005, captures the bottomless depths of Faithfull’s brutal and ragged beauty.

Expertly curated by the Montreux Jazz Festival and BMG, restored and remastered in superlative HD audio, the set is released on CD and 2X LP.