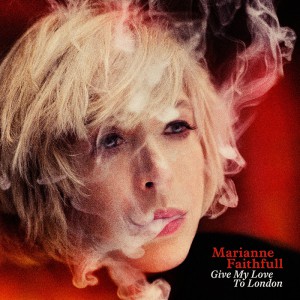 Marianne has recorded a new album, Give My Love to London, which is due out in September. Produced by Rob Ellis and Dimitri Tikovoi, it features some very special guests. Marianne wrote the lyrics, and the music has been written by Pink Floyd’s Roger Waters, Nick Cave, Anna Calvi, Steve Earle, Pat Leonard, and Tom McRae.

The band on the album is equally stellar, consisting of the aforementioned Ellis and Tikovoi along with Portishead’s Adrian Utley, Ed Harcourt and Warren Ellis and Jim Sclavunos of Nick Cave & the Bad Seeds.