A rare newly discovered outtake from the North Country Maid shoot in 1966 by legendary Rock & Roll photographer Gered Mankowitz, its on show in London as part of a collaboration with Royal portrait painter Christian Furr at Bar 45, 45 Park Lane, The Dorchester until 5th August 2017. 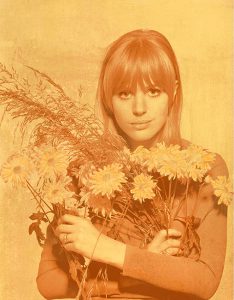 The Portrait: Marianne in 1966, ‘Golden Slumber’ by Gered Mankowitz and Christian Furr